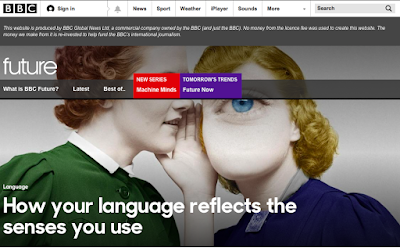 "When offered bitter-flavoured water, all Farsi speakers in the study described it as “talkh”, the Farsi word for bitter."
This was not the case with English speakers. When offered the same bitter-flavoured water, “English speakers said everything from bitter, to salty, sour, not bad, plain, mint, like ear wax, medicinal and so forth”, says Majid.
She says this kind of taste confusion consistently happens to English speakers in lab tests: “They describe bitter as being salty and sour, they describe sour as being bitter, they describe salt as being sour. So even though we’ve got the vocabulary, there seems to be some confusion in people’s minds over how to map their taste experience onto language."
Posted by Sophie Hardach at 11:52 No comments: