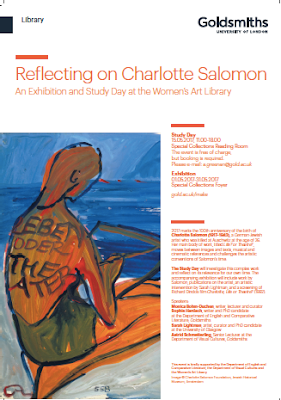 This year marks the 100th anniversary of the birth of Charlotte Salomon, the Berliner artist who created Leben? Oder Theater? ('Life? Or Theatre?') - a painted memoir that tells the story of her life in more than a thousand gouaches.

Salomon painted the wonderfully strange, moving and beautiful work in her early twenties, while she was hiding from the Nazis in southern France. Not long after its completion, she was arrested and deported to Auschwitz, where she was killed at the age of twenty-six. A friend saved the gouaches and handed them to Salomon's father and stepmother after the war. A selection was published as a 'diary in pictures' in the 1960s. But it was not until the late 20th century that Salomon found proper recognition.

A (more or less) complete version of Leben? Oder Theater? was only published in 1981, and in 1994 a meticulously researched biography by Mary Felstiner, an American scholar, drew global attention to Salomon and her work (To Paint Her Life: Charlotte Salomon in the Nazi Era; HarperCollins). Since then, Salomon has inspired researchers, writers and artists around the world. Her bold exploration of female identity, family secrets, mental illness and the quest for artistic fulfilment seems to have finally found the appreciative audience it deserves.

Earlier this month I spoke about different aspects of Leben? Oder Theater? at a Charlotte Salomon study day at Goldsmiths College. I focused on Salomon's depiction of motherhood and childhood ("This Cosy Family Life": A Literary Perspective on Motherhood and Childhood in Charlotte Salomon's Leben? Oder Theater?). Unfortunately I was only able to catch a small section of the study day, but I'm hoping that there'll be many more events around Salomon and her work this year.

A small (free!) exhibition on Salomon will be on for a few more days at the Women's Art Library at Goldsmiths, and is definitely worth visiting. I would also strongly recommend Astrid Schmetterling's book 'Charlotte Salomon: Bilder eines Lebens'. Astrid co-organised the study day and has written extensively on Salomon, and the book is a really thoughtful and interesting investigation into her life and work.


Posted by Sophie Hardach at 10:14 No comments: