Populism Explained (by a Neuroscientist) 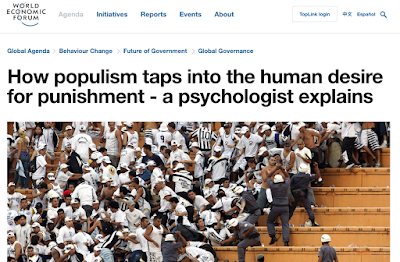 I interviewed Dr. Molly Crockett, a behavioural psychologist, on the destructive, addictive urge to punish - a phenomenon known as "costly punishment" - and how it's linked to the rise of populism. The bad news is that each act of retribution makes it more likely that the person will do it again... that's the addictive part.

Also, "one speculation is that this destructive impulse to punish may be even stronger when people are under chronic stress, for example during an economic recession."

Obviously her research doesn't fully explain why people voted for Brexit and Trump, but it offers some interesting new angles. Here's another quote:

"Populist messaging has been very effective in channelling retributive impulses into votes. Around the world populist movements are wreaking economic destruction and social turmoil in the name of moral principles. That may be the story people are telling themselves and others, but it's likely not the only motive."

Posted by Sophie Hardach at 08:34 No comments: