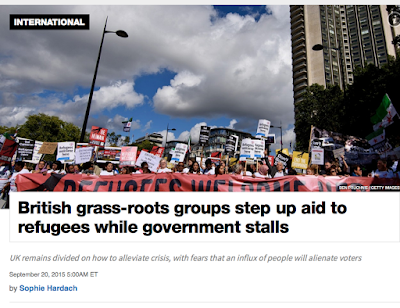 Halal pot noodles, waterproofs, organic tomato puree: Londoners join the effort to help refugees on the continent. Recent feature for Al Jazeera. Here's how you can support one of the grassroots organisations - through crowdfunding.

Posted by Sophie Hardach at 01:05 No comments:

'Where else should I live?' The refugees housed at Dachau My feature for the Guardian on the refugees housed in the "herb garden" at Dachau, a former Nazi slave-labour plantation in the grounds of the concentration camp. It's one of those stories that will stay with me for a long time. Some of the people I spoke to want the site to be a memorial and exhibition space; others say the space is needed as social housing. But the interview that touched me most was with Ashkan, a young Afghan man who lives at Dachau, and his girlfriend, Dania.

While the German officials around them were trying to find a balance between commemorating past wrongs and addressing present needs, Ashkan and Dania were caught in their own, personal struggle to reconcile the past with the present. A timely reminder that a refugee's journey doesn't end when she steps off the train in Germany.

Posted by Sophie Hardach at 01:00 No comments:

7 months pregnant... and on the run


My piece for AlJazeera on the refugee mothers who risk it all to take their babies to safety:

I spent a few hours with them last week in Munich. First at the station, then at their emergency shelter, then in a vast, dark industrial park as the group of fourteen adults, two infants and a toddler tried to figure out what to do next. They'd banded together along the route, forming a sort of baby trek as they were the slowest and weakest on the trail. The two young mothers were still breastfeeding their infants, 2 months and 3 months old respectively...

I asked them how they even washed the babies along the way, you can read the reply in the piece.

Posted by Sophie Hardach at 01:02 No comments:

The Syrians who've made a new life in the West 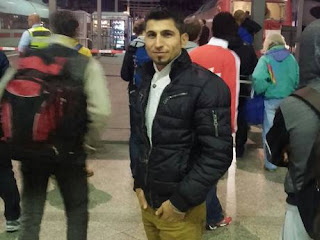 "I always say, Germany is my mother and my father. When I came here, Germany gave me food, it gave me somewhere to sleep."

Another story I wrote for the Indie out of Munich - the Syrian refugee who is trying to reunite his family, train by train.


Posted by Sophie Hardach at 03:15 No comments: